This award is given to SGS members in the academic milieu who have shown excellence in leadership within and contribution to professional organizations and organizations which serve older people, a strong record of scholarly publications, and significant teaching influence with students and/or training of service providers or educators.

This year’s awardee, Luci Bearon of North Caroline State University, has been in the field of aging for over 40 years. She is the 2011 recipient of the SGS Applied Gerontologist Award, is a Fellow of the AGHE, and has many other distinguished honors for her work with grandfamilies. She was also instrumental to the development of the NC strategic plan for Alzheimer’s disease and related dementias. With numerous publications in journal articles and book chapters, Dr. Bearon is published in the areas of grandparenting, caregiving, nutrition, elder abuse, gerontological literacy, and attitudes, beliefs and expectations about aging, to name a few. She is well known for the vast amount of curriculum she has developed and delivered to family caregivers and to extension agents as well as otherservice providers. 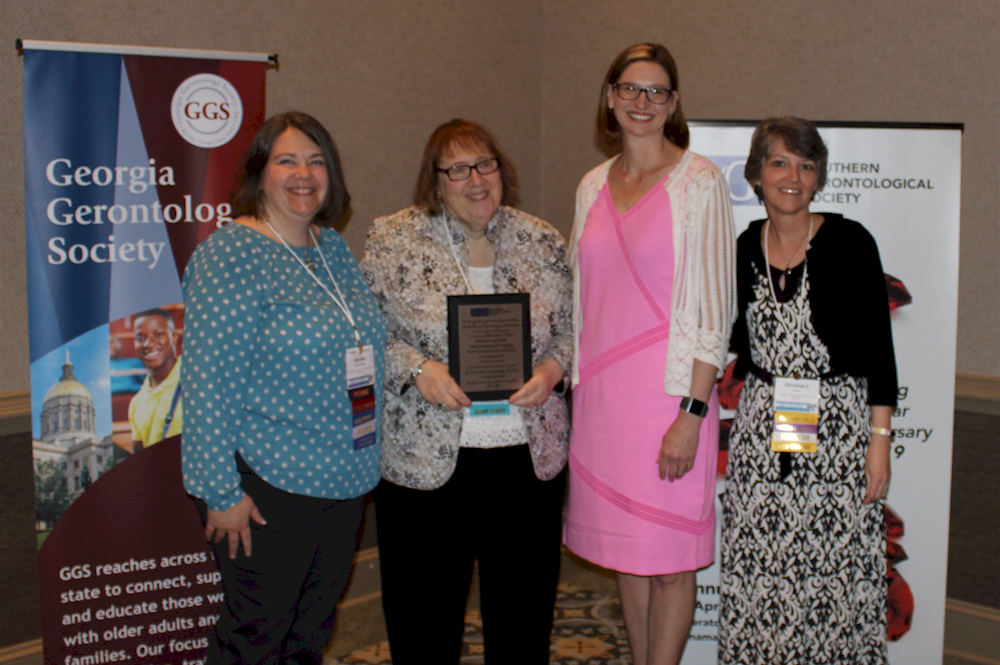 This year the Applied Gerontologist Award goes to Dr. Sudha Shreeniwas from the Department of Human Development and Family Studies of the University of North Carolina at Greensboro. Dr. Shreeniwas' applied gerontology takes the form of community engagement and practice-based research across the span of adulthood. She has partnered for the past 7 years with the Creative Aging Network of NC and is the founder of Kiran, Inc.,a NC organization that provides domestic violence/crisis services to people with ties to the SE Asian community as South Asians are the largest Asian subgroup in NC. She brought a number of students to the conference and is considered a wonderful mentor. 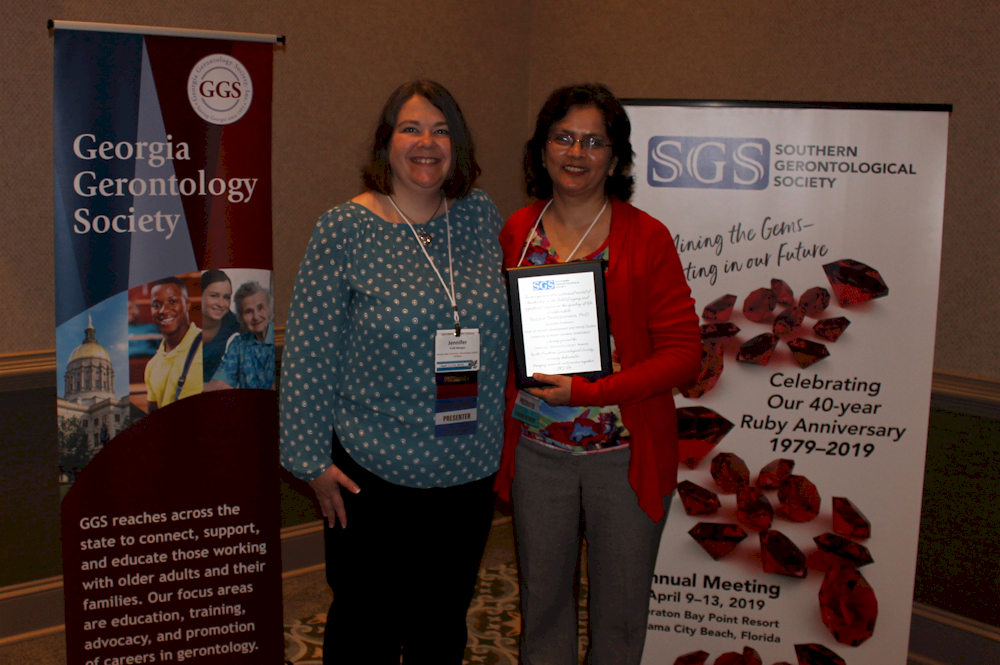 The Rhoda L. Jennings Older Advocate Award is presented to an individual who is 65 years of age or older who has demonstrated effective advocacy and leadership among older adults in the Southern region.

This year's awardee, Dr. Althea Taylor-Jones, has been an advocate for aging through her work at Winston-Salem State University for years as she trained and helped young students develop skills and expertise to become leading figures in the aging field after they graduated with their gerontology degrees. She has served in the North Carolina Senior Tarheel Legislature, eventually taking their leadership position. She has been a Lead Legislative Advocate for NC AARP as well as having served on their Executive Council. Althea's devotion to advocacy for aging is a personal mission and as the wife of a minister, she still does many hours of work with older adults who need assistance maneuvering in the complex system of services for their needs.

Dr. Taylor-Jones' comments are included below:

I count it an honor to have been nominated for, as well as granted, the 2018 Older Advocate Award from the Southern Gerontological Society. Although I retired from official academic responsibilities as a Professor of Gerontology and Program Director in 2009, my momentum in the field of aging continued and has intensified.

As a child, I was reared with and observed the belief that "to whom much is given, much is expected and/or required." Additionally, our ‘precious seasoned citizens’ paved the way for us and certainly deserve to age with dignity and style, aging in place or in the least restrictive environment.

I practice the "paying it forward" principle - (doing something good for someone in response to a good deed done on my behalf, or a gift I received). Therefore, when Saint Peter comes for me, to take me to my final resting place, he will need to bring a posse or host of angels with him. Reason being, I plan to be so engaged in advocacy on behalf of others, especially older adults, that it will be very difficult to locate me, to end my tenure in this earthly life! 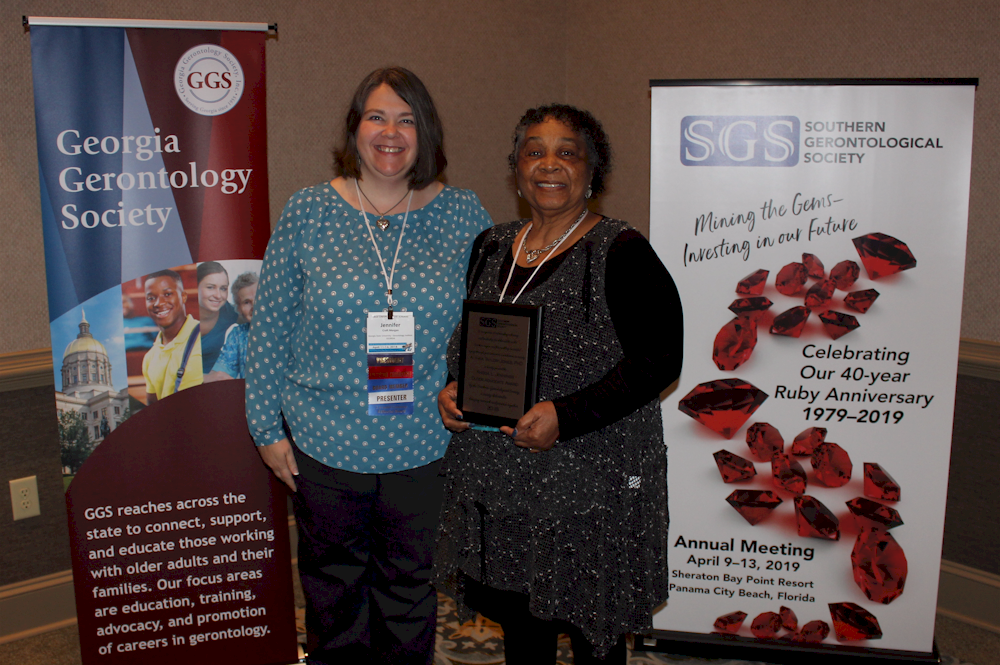 SGS offers the Media Award to recognize an outstanding media contribution to further understanding of aging in the region and to the mission of SGS. Media of all kinds are considered for this award. Think of the importance of the Media Award...how did you get the information about this conference? Somehow, media was involved through a newsletter, website, Facebook Post, or flyer. Information is all around us. Shifting through to the good information, the award winning information, is what this award is all about.

The SGS Media Award this year goes to Mine’s Eye Production "Care" documentary. Which asks us some hard questions: We want our loved ones to age with dignity, but who will pay for the care? And who will care for the caregivers? "Care pulls back the curtain on the poignant and largely hidden world of in-home eldercare.

Beautifully shot and deeply moving, the film reveals the complex nature of the work, th intimate bonds that form between care workers and elders - and the cracks in a system that is poorly serving both." 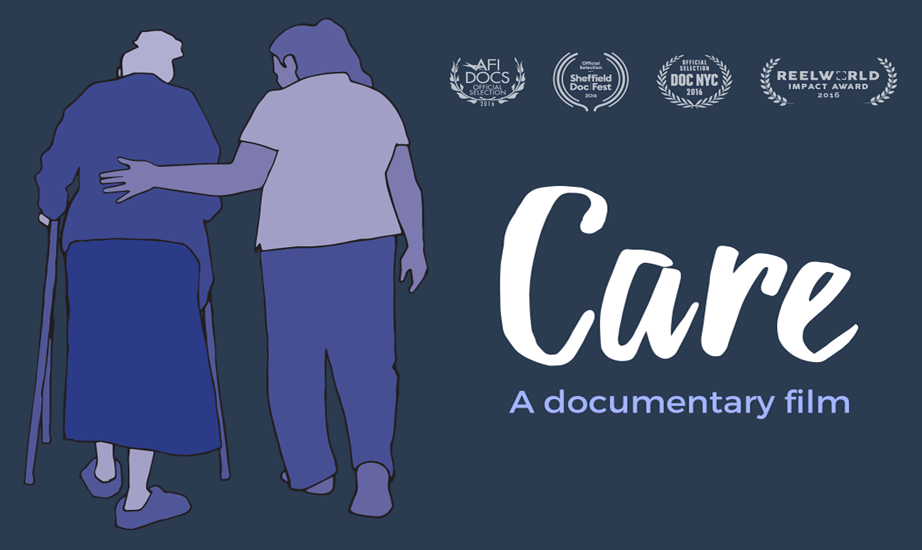 This year the Best Practices Award was presented to Denise Butler of the Riverside Center for Excellence in Aging and Lifelong Health for her leadership of the Williamsburg Memory Café.

The goal of the Williamsburg Memory Café is to provide a safe comfortable engaging environment where people with memory loss and their care partners can laugh, learn and remain socially engaged with others traveling the same journey. The Café has grown substantially in the past two years and now two different groups are meeting in the community. There are a number of volunteers who have contributed to the success of the program and many other communities are inquiring about how to start their own Memory Café. 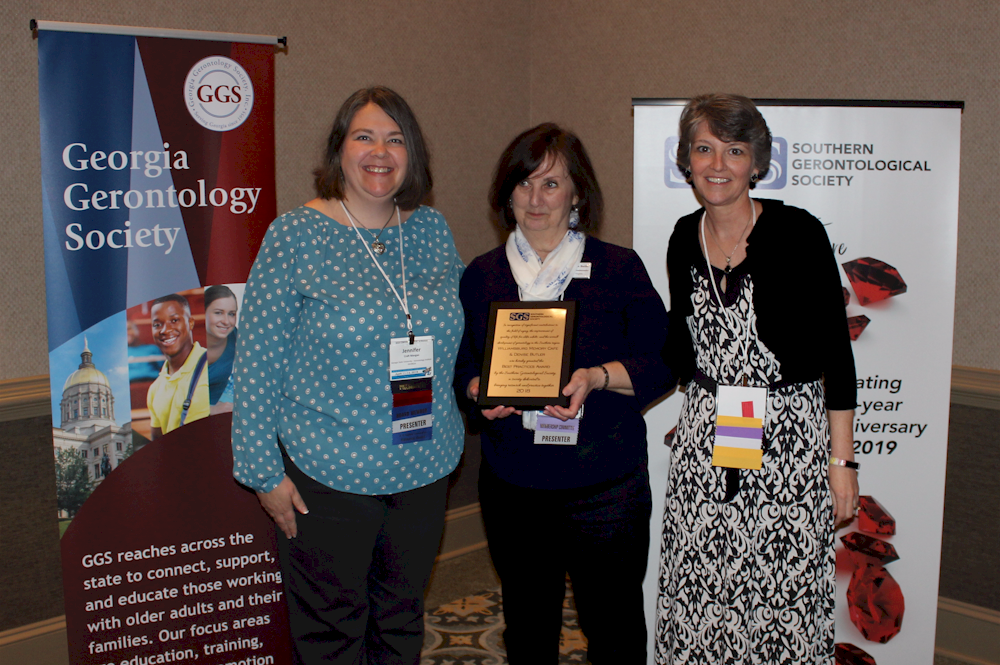 Three students were granted scholarships to help to defray travel costs associated with attending and presenting at the Annual Meeting. The amounts awarded were as follows: 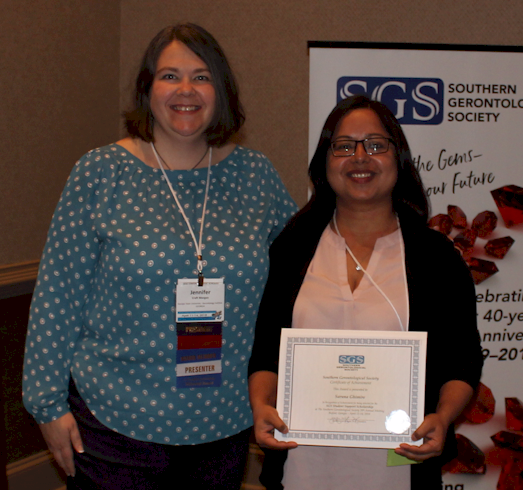 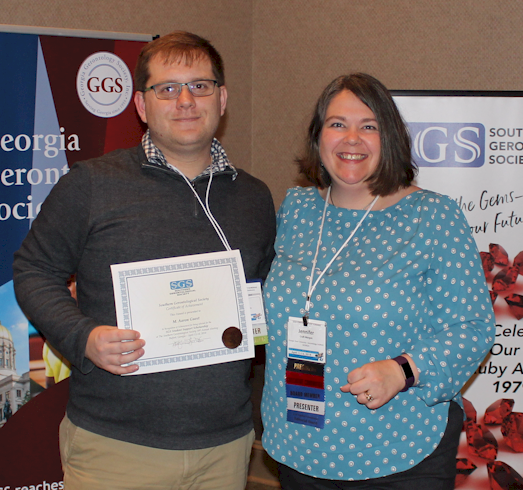 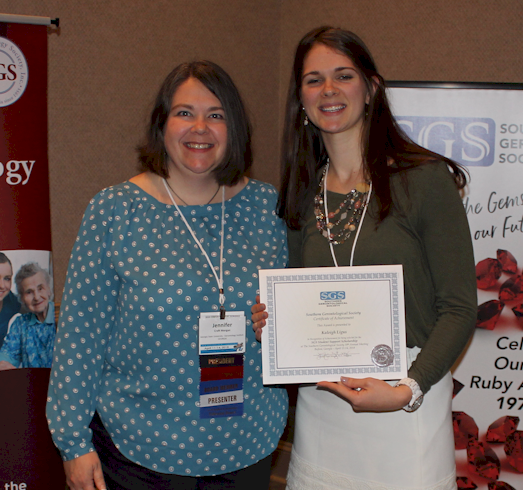 Any SGS Student Member submitting scholarly work for presentation at the SGS Annual Meeting in Poster format as the primary author is eligible for the Student Poster Award. Student must submit their application for the award prior to the conference, however, the judging takes place at the conference. Criteria includes poster appeal - how it looks, content - the research, analysis and results, and presentation - how well did the student present their poster to the judges.

Cheyann Kazemian: "Pressure Ulcers Awareness and Prevention Among the Elderly"

Carol Jacobs: "Care Givers Care - Who cares for you, while you are caring for your loved one?" 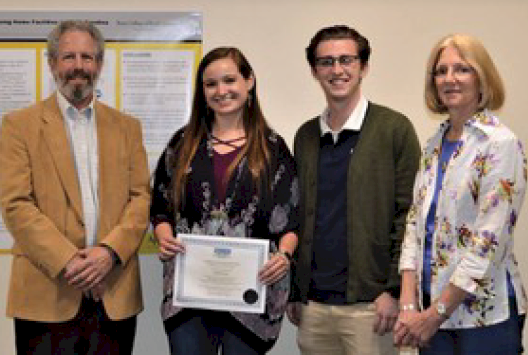 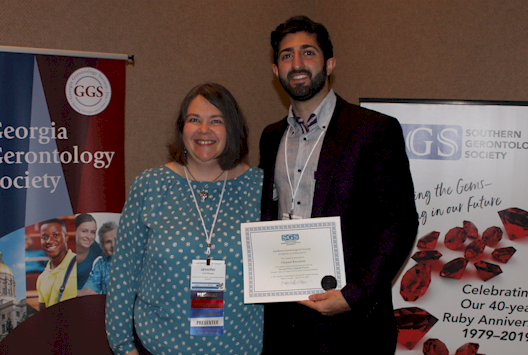 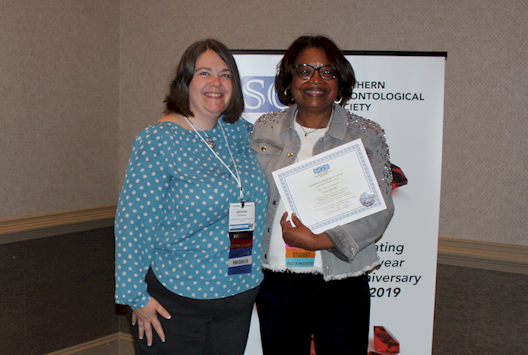 The student paper award is awarded to an SGS student member who is the lead author of apaper which was submitted in advance of the conference to be reviewed by the awardscommittee. The research ideas must be substantially those of the student with an emphasisin gerontology. The student’s faculty advisor must write a letter of support. This year there were three papers that rose to the top. As each paper had its merit, it was very difficult process for the reviewers to select a winner.

This year, the SGS First Place Student Paper Award goes to: Amanda Thomas Dawson from UNCC under the direction of Dr. Michael J. Turner wrote the paper “Intergenerational Programming on a Multi-Generational Play Park and its Impact on Older Adults”

Of the close contenders this year, we have two students that are worthy of Honorable Mention.
Saruna Ghimire from the University of Nevada Las Vegas with Faculty Mentor Francisco Sy, submitted the paper titled “Decline in Telomere Length by Age, Gender, Allostatic Load and Comorbidities in National Health and Nutrition Examination Survey (1999-2002)”
Kyle L Bower from the University of Georgia with faculty mentor Denise Lewis submitted the paper “Generativity among sexual and gender minorities: Building foundations of self-acceptance” 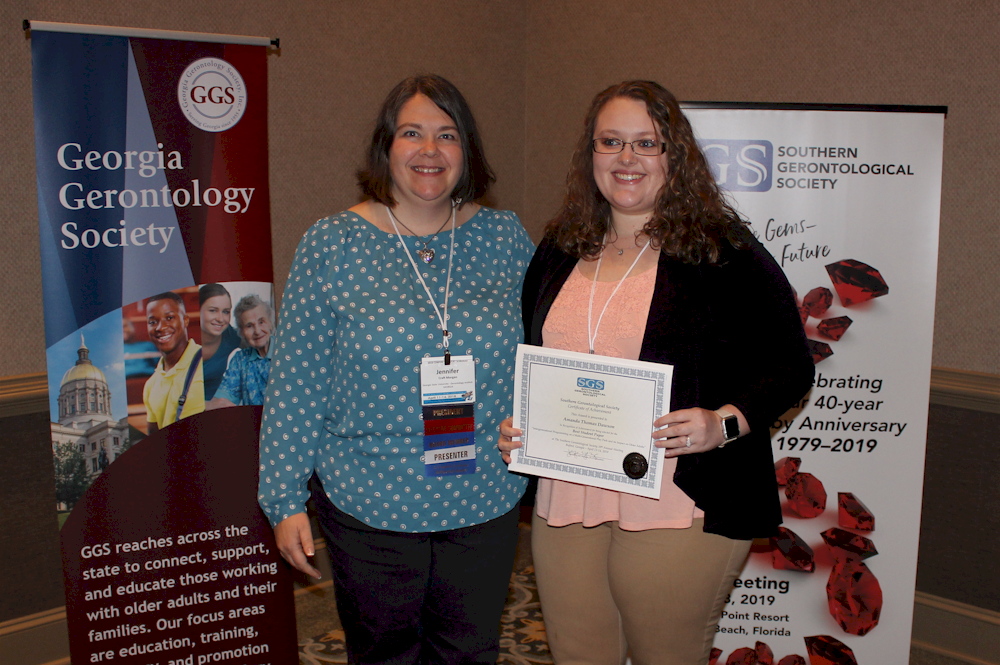 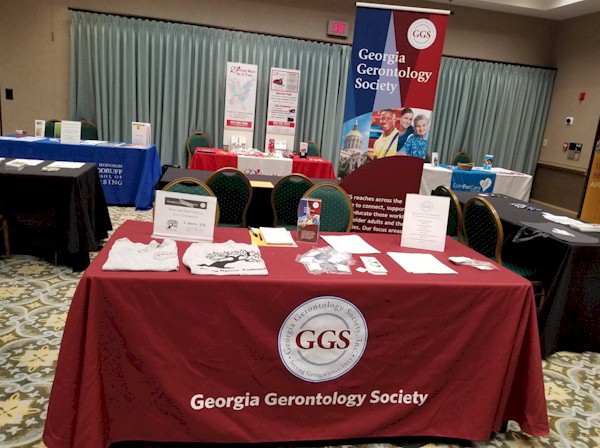 Click or tap on the image to view the page.